BLOODBATH AT THE HOUSE OF DEATH!!!

TVNZ has outdone itself with this slice of sensationalist tabloid journalism.

Screw that we’re trying to get the parties talking and avoid a lot of people getting dead, and a legitimate – if bloody dodgey – government being violently over-thrown.

There’s a story, and the people have a right to be told what some sad little wet- behind-the-ears alleged journalist thinks about it all, based on her massive experience of things military (i.e. she read a Commando Comic last week – well, it was good enough to make Keith Locke defence spokescreature for the Greens)

Adolf at Sir Humphrey’s takes them apart, and Ed has grabbed the video of the high point for your viewing displeasure.

Anyway, I loathe bagpipes. I have long suspected that bagpipes, like kilts, were an elaborate practical joke played on the Scots by the English, in revenge for the Scots being a troublesome & pugnacious bunch (ie, by standing up to them).

Lets see what the bard would have to say, shall we…

KING HENRY V
No, I am a Welshman.

PISTOL
Tell him, I’ll knock his leek about his pate upon Saint Davy’s day.

Sounds like a plan, we’re going to beat you with veggies (Note to Benson Pope, you are NOT invited)

For a people who’s history is getting your asses kicked out of your own country and ending up in the vertical bit that even the Angles, Saxon & Jutes didn’t want, and have a bloody parsnip for a national symbol, you want to be careful who you go slanging off there, fellow.

The kilts and bagpipes have made it around the world. You have a soup ingredient. 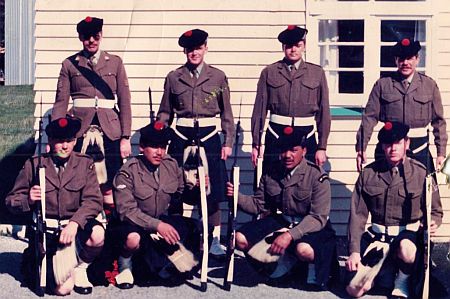 You can’t stop the signal.

OK, you sad-arsed leftie trolls, get to work: Whaleoil is using the three-to-one response system. You get one pulled, three others pop up.

Putting out fire with gasoline there guys.

Oh, and don’t forget this one of a kind slice of New Zealand political history:

What lucky devil is next up for our complete and undivided attention do you think? Lets see who the police swoop on at 4.30 on a Friday after the house goes into recess, shall we.

Because we felt like it., New Zealand Politics, Public Service Announcement |

The award-winning Panty Slut-Boy The Video has been pulled from Youtube.

Do you still want to see it? Possibly share it with your friends or a select group of like-minded consenting adults – who can say.

Well, you can with this Trademe auction. Proceeds may well be going towards keeping Whaleoil from being Tim Selwyns new roomie.

Google “panty slut boy” and see who… pops up, as it were.

Voter seeks someone to vote for.

Are you a conservative political party?

Do you wish to be elected as the government of New Zealand?

Then I want to vote for you!

So where the bloody hell are you?

John Keys first words as leader of the National Party have ensured it’s not National I’m looking for. The man talks like a bloody PC socialist, and has just rebranded National as Labour Lite.

We’re now down to which left wing party to suffer under. Screw this.

David Benson Pope complained that he didn’t have enough time to join a sex club. But word is his diary has been cleared, so he now has all the time in the world to go play bad doggy.

Whaleoil asks the questions – where are the answers?

It turns out that these guys did have insurance, and we seem to be headed towards a satisfactory conclusion of that aspect of the trip.

Well, they chaps are victims of their own success and an untimely long weekend in the host country of their server.

Expect them back on screen some time Tuesday.

Do what I did to avoid 509’s: build up a really succesful site, have some yank fly boy unilaterally take control of the hosting and then screw round with the site at his own whim, while ignoring all the authors, walk away and start your own private club for the readers that follow you.

You’ll never exceed your bandwidth or have to deal with inane wankers, who think they have a right to be dickheads on your dime.

Other authors may come with you, but not actually post that much anyway. It’s all good.

Hey look at that, the Friday Night Free For All made the WordPress Top 100 of the day.

Friday Night Free For All |