Yes its a new post, I’ve been absent for over a year doing other stuff.

So to sumarise:
Completed by honours degree,
started my Masters thesis,
got married,
having a baby in October,
starting PhD in Febuary 2013. Such is the plan anyway.

Further to that item my thesis is related to the impact of torsion artillery on ancient warfare. There is a strong focus on practical testing and there will be large catapults built and operated in field condtions. The largest of these will be Agrippa, a 4 mina ballista. (Thats fancy Latin talk for it throws 3.25kg stones.)

Disturbingly a couple of New Zeland based businesses have offered the primary ingredients of metal and wood to build this machine, so now I’m just looking to raise the funds to be able to move things from where they to where they’re needed. Below is a link to the fund raising site for Project Agrippa. Please go there, be amazed (that they let me write stuff without getting it spell checked), throw $20 at it (for which you’ll get a replica Augustus/Agrippa coin) and tell everyone you ever met, hell walk up to complete strangers on the street and tell them! Because its the sharing that gets these things funded. 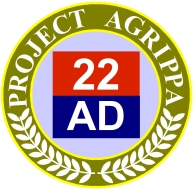 More updates later when I remember that not everyone is my friend of Facebook.

This entry was posted on Thursday, July 19th, 2012 at 9:16 am and is filed under Missing in academia, Public Service Announcement, Siege engines. You can follow any responses to this entry through the RSS 2.0 feed. You can leave a response, or trackback from your own site.

2 Responses to Not dead, just sleeping.