VDH is my role model in case anyone was wondering.

Its the hate from conservatives that caused it clearly.

Gateway Pundit’s response to Ron Paul saying the “War of Northern Aggression” could have been prevented by the North buying the slaves from the South.

Of course, this is ridiculous on many levels. For one, hindsight is 20/20. No one knew going into the war what it would mean to this country– that 600,000 Americans would lose their lives, that the South would be devastated.

Let me start by saying it’s reasons like this that make it hard for me to get behind Ron Paul. GP obviously lacks any experience in war-fighting. The damage to the South was inflicted with purpose, conviction, and malice by the North. The war was as much of a clash of cultures as it was a war about economics or liberty. In fact, I could make the case that it was inevitable given the North’s attitude towards Southerners and the rebellious nature of Southern culture. In many ways, this was rematch of the war for Independence from the crown.

Some background first. As the North industrialized, they came to view the South as backwards, uneducated, and dirty. The South was populated by Scottish Highlanders. The North populated mostly by British. Scottish Highlanders had made a name for themselves as having all of those characteristics and in many ways they continued those traditions when they immigrated to the South. Slavery was dying in the South. The cotton gin and competition from Africa had driven the price of “King Cotton” down to the point that slavery was no longer supportable. The Northern anti-slavery movement was driven by evangelicals flush with self-righteousness and fresh from an anti-slavery victory in Britain.

This background is important. Herein lies the seeds of tyranny. Our founding fathers wanted to prevent special interest from using the government for purposes of intimidation. The war destroyed our voluntary union and set in motion the creeping tyranny we see in America today. The South fought for our freedoms and liberties. The victory by the North ensured that our freedoms would constantly be assaulted by these petty tyrants that know what’s good for us.

Be careful what questions you ask least people tell you what they think. No doubt Obama will let us know that USA today is not a real news agency anyway so it doesn’t count.

Actually to be fair Jimmah isn’t an anti-Semite just when he’s critical of Israel, he’s a 24 hour a day anti-Semite.

Love your country, but never trust its government.
— Robert A. Heinlein.

You guys might want to watch this boy. He might be able to deliver rainbow pooping kittens but his foriegn policy would get a D- at high school.

American politics, Blithering idiots of our time. | Tagged: The One |

Ok a few people have noticed that there seems to be a lot of news just about Obama at the moment.

Obama sworn in – media unable to edit his verbal ineptitude for him. Film at 6

Obama rasies the dead. Thanks Ohio voters, flim at 6.66 (that must be a typo… never mind)

Obama surenders, white flags handed out to all American school children after first day in office. Statue at 6.10

Well here at Hitting Metal With A Hammer we know that looking directly at even just images of the Chosen One can be hard on motal eyes and some times we just need a break from the rapture of being in his media supplied presence. So we’ve set up a filtering system and below the fold is ALL the news but everything with a reference to The One has been deleted so that you may read your news without the inconvienience of having to mumble “praise his name” every other sentance. Enjoy.

END_OF_DOCUMENT_TOKEN_TO_BE_REPLACED

And finally before you vote… 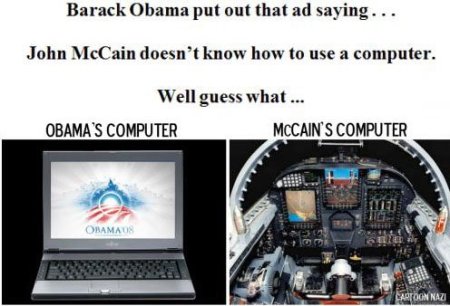 Now go forth, you have a choice of two and its not a trick question.

Try not to fuck it up.

Something to keep in mind when you vote.

Socialists are people who mistake nice ideas for good ones.

Senator Obama has put out an ad that says simple-minded John McCain cannot use a computer.

Barack cannot land a jet plane on a moving aircraft carrier at night.