I have a question for Vernon Small.

In regard to your farmer hating factually devoid bash piece on the front page of the Dompost this morning, why was there not an authorisation statement telling us who approved and financed your whore piece for the Labour Party?

Not even the slightest attmept to even dusguise this utter propaganda as news Vernon. The red banner the over sized shock horror. About as subliminal as labour party press released wraped wound a brick and thrown at the forehead. Either the labour party paid you for this base abuse of your suposed journalistic ethics and you’re a whore. Or you chose to deliberately corrupt your work for free, making you a socialist slut. Which is it Vernon?

I ask merely for information.

Racism in Australia – the facts

We’ve seen a LOT of hysteria from the media about racism in Oz. And they make it clear, the problem is those white supremist bastards beathing up the Indian students.

The problem I had with all the reports is that when people are shouting at cameras and they have a beef with someone they are generally pretty up front with telling us WHO that beef is with. No such mention was made. But its ok the media have kindly filled in the blanks and we’re told this is an extension of those evil white supremists at Cronulla who inspired the innocent muslims to retaliate by smahsing everything thye could get their hands on at night.

Problem. I suspect this is not acutally true. The follwing was sent to me by an Australian because hes concerned out media are being less than forthcoming with us.

Fun fact about that – turns out the attacks are being carried our by Lebanese in Sydney, and Somali/Sudanese Muslims in Melbourne.

Which doesn’t exactly explain my we were treated to the sight of a local imam on brekfast TV castigating skippies for racism and demanding conciousness raising classes for evil whites and extra police protection for “victims such as Musklims”.

Make of it what you will. The mainstream media certainly have.

Maybe the sight of Indians and whites together clashing with Muslims will be your first clue that you’ve been sold bullshit. Not me though.

There’s a line between bias and outright lies. McRoberts is the wrong side of it.

1. The programme standards which I believe were breached are as follows:

The program featured an interview with Mike McRoberts in Israel regarding the calls by some reports for Israel to be charged with war crimes. Mr McRoberts presented a history of Israel Palestine conflict with was biased and factually inaccurate leading to a false understading of some elementary issues in the situation.

On the basis of his report I believe that TV3 has viloated the stanards 4,5 and 6. Balance, accuracy and fairness.

2. The reasons that I found this programme breached the programme standards listed above are (use specific examples from the programme and explain your complaint fully. You may choose to copy and paste from a Word document.):

Specifically Mr McRoberts reported that when Palestine was given to Israel the Palestinians were forced to move giving the impression that a self ruled Arab nation called Palestine was handed over to another people. In actuallity the area which was a British mandate within which resided both Jews and Arabs. Under the Unitied Nations the area ceased to be British controlled and was divided into two states being Arab and Jewish controlled. The Arabs refused to accept the United Nations solution and demanded the entire country and lauching military action against Jewish settlements aided by foriegn military forces from the Arab world. Arabs were not then and never have been forced out of Jewish controlled areas or Israel. Many resident of Israel are Arab Muslims. The military failures of the Arabs forces lead to the loss of land. This is a consequence of their agressive response to creation of the two states. Secondly Mr McRoberts also stated that since then the Jewish population as “flourished” while the Palestinian populations has “gone backwards”. This is quite simply a demonstably untrue. The Arab population in 1948 was around 1.3 million while the Jewish population was around 600,000. the Palestinian population is now estimated at nearly 11million while the population of Israel including non-Jewish Israelis is around 7.3million. Clealry both populations have increasde with that of the Palestinians being well ahead of the Israelis.

Make yours here or simply accept what they want you to hear as being the only voice.

Ok a few people have noticed that there seems to be a lot of news just about Obama at the moment.

Obama sworn in – media unable to edit his verbal ineptitude for him. Film at 6

Obama rasies the dead. Thanks Ohio voters, flim at 6.66 (that must be a typo… never mind)

Obama surenders, white flags handed out to all American school children after first day in office. Statue at 6.10

Well here at Hitting Metal With A Hammer we know that looking directly at even just images of the Chosen One can be hard on motal eyes and some times we just need a break from the rapture of being in his media supplied presence. So we’ve set up a filtering system and below the fold is ALL the news but everything with a reference to The One has been deleted so that you may read your news without the inconvienience of having to mumble “praise his name” every other sentance. Enjoy.

END_OF_DOCUMENT_TOKEN_TO_BE_REPLACED

Where in the world?

Would you find a little girl holding a sign saying kill all the Jews and proudly displaying a swastika? Nazi Germany? The West Bank? Iran? An Illiois Nazi rally? (I really hate Illinois Nazis!) 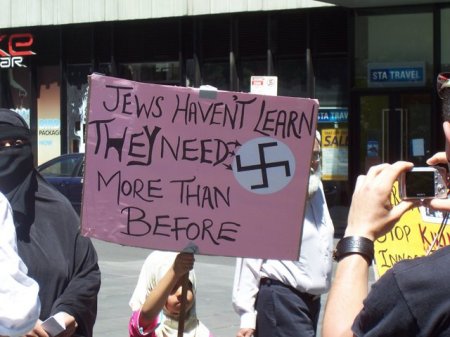 END_OF_DOCUMENT_TOKEN_TO_BE_REPLACED

Anyone else think it was odd

Is this your mask we found in orbirt Dunky Poos? Seems to have slipped just a smidge.

Winston Peters’ apparent distaste for Asian immigration does not extend to Singaporean jockeys, who he says are usefully “born light”.

The NZ First leader believes that immigrants can be used to solve New Zealand’s jockey shortage.

He has even agreed to help Vickneswaran “Victor” Marigapan’s fight to stay in the country.

Mr Peters said Singaporean jockeys would not be part of his proposed cuts to immigration numbers because they filled a “known, proven niche”.

Nothing at all like what Lockwood Smith said is it media people?

Mr Peters said talking about Asian jockeys being “born light” was not the same.

No didn’t think so.

You know you MSM people might be easier to understand if you GOT HELENS DICK OUT OF YOUR MOUTHS!

Bobby Lee with some notes for the media of all times.

“It appears we have appointed our worst generals to command forces, and our most gifted and brilliant to edit newspapers. In fact, I discovered by reading newspapers that these editor/geniuses plainly saw all my strategic defects from the start, yet failed to inform me until it was too late. Accordingly, I am readily willing to yield my command to these obviously superior intellects, and I will, in turn, do my best for the Cause by writing editorials – after the fact.”

And just a quick thought, does ANYONE remember the names of these reporters? Something for you MSM “professionals” to give some thought to.

You have redefined “shamless hackery” into a whole new level.

Your “expose'” on the “elusive” John Key should be billed to Labour as an election expense. (Yes those are very much sneer quotes.)

The first line (of only two);

A former Army sergeant is to stand trial on sex charges involving girls under 12.

Our media can’t get even the simplest facts right how the hell can we trust them to get the big stuff right? We can’t.